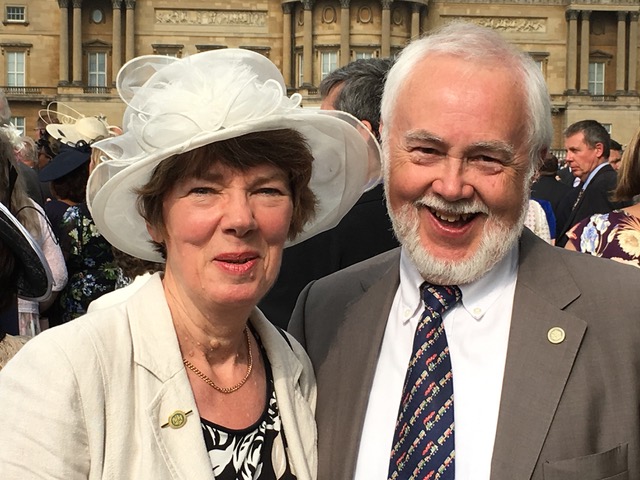 At it was close to a significant birthday, Brenda Hurford  (Enfield branch) and husband Tony (Hampstead branch)  – picture above – spent a couple of nights in town with dinner, theatre and other entertainments  – “so it was a most enjoyable occasion”. Trudie Spicer, (above, with grandson Andrew) a branch member of the East Dorset and Ringwood NHS Retirement Fellowship (NHSRF), won the Wessex region ballot to attend a Buckingham Palace Garden Party. On the big day Trudie travelled to London by train, accompanied by her grandson Andrew. Upon arrival in London Trudie was told that she would be taken by taxi to a surprise venue for lunch beforehand. Unbeknown to her, however, Trudie’s son in law, who worked for the owners of the Hotel, had arranged a wonderful reception at the Ritz for her! Trudie was met and treated just like a VIP, given a special goodie bag and after a lovely lunch she was taken by chauffeur driven Daimler to Buckingham Palace. Alas the Queen was not present but Trudie saw Prince Charles and Prince Edward. A fine finish to a wonderful day that Trudie will remember forever.

Pearl Morton and Annie Bramwell (above) from the Peterborough branch headed north to Holyrood Palace for their Royal Garden Party.